Christian (Smith) Miller was one of the first settlers of what is now Conemaugh Township. In 1790, he bartered for 300 to 500 acres of land from the Shawnee lndians In the area near Jerome. In 1790, he married a girl by the name of Berkey and they erected a cabin near the Maple Spring Church Grove. Here ten children were raised. His first wife died at the age of 33 and he later married again. They lived with the Indians with whom they were friendly.

Their son Jacob took care of Christian and his wife until l835-1939 when they died. All the rest of Christian’s children went to Ohio and farther west as the west opened. Many settled in Holmes County, Ohio, where today 90% of the population have their roots in Somerset County. Christian was the first pioneer Bishop and Minister of the Amish Church in Conemaugh Township.

Christian and his wives are buried on the hillside of Mary Yoder Farm near Maple Spring Church Grove.

Joseph Johns I, who founded the city of Johnstown in 1793, purchased a farm near Davidsville (top) in 1804 and resided there until his death in 1813. , bounded by its bright white fence, can be readily seen atop an easterly hill from U.S. Route 219 north of Davidsville.
Shaffer Bridge (bottom), the only remaining covered bridge in the Township, is located on Covered Bridge Road within sight of its intersection with Route 985. 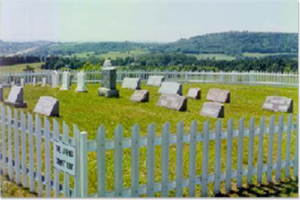 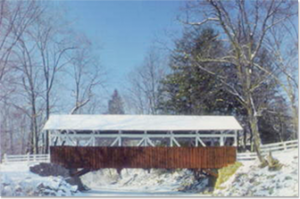